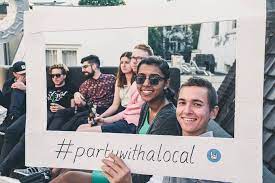 “You can Party with a Local almost everywhere”

Is it a bird? Is it a plane? NO! It is Party with a Local! THE app that connects likeminded people all over the world, for free. Meeting awesome new people, everywhere, we love it! KnappeKop (HandsomeHead) Lieve had the opportunity to meet Dan Fennessy for an interview! So read on, because it is awesome!

Who is Dan?
Australian native, now Amsterdam-based Startup Founder with Party with a Local. I studied Cartography (making maps) at university, then started working for Lonely Planet (as a Cartographer). After a few years working at LP I decided to take a year off to travel around the world. It was on that trip I came up with the idea for Party with a Local and met a girl that brought me to Amsterdam. I moved to Amsterdam, worked for TomTom for a while, before getting interested in online marketing and starting my own online marketing company.

How did you end up in Amsterdam?
I met a Dutch girl on my round the world trip (we met in Guatemala). We fell in love and I eventually moved here. Planned to stay for 1 year, but I’m still here 8 years later! (Amsterdam is an easy place to get stuck – in a good way).

Compared to Aussie, is our culture (very) different?
Not so different. The Dutch are a little bit (/a lot!) more direct than us laid back Aussies. A Dutch birthday party (sitting in a circle and congratulating everyone) is different to an Aussie birthday (which usually just involves heavy drinking). There is also a big bike riding culture here, which is awesome, whereas in Australia you need a car because the distances are so big. Apart from that, people are pretty similar I would say.

When and why did you invent the App?
The idea for Party with a Local came from my own experiences of traveling and finding that a night out anywhere is better with a local, but it’s not always easy to meet locals. Now myself and the team are solving our own problem with Party with a Local. We have a passion for connecting people and we love seeing successful meetups, great nights out, and genuine friendships formed via PwaL. The ability to bring people together for awesome experiences – this is what excites us the most.

We heard that creating an app is very difficult: you have to be very patient, comes down to a lot of testing and cost heaps of money?
Patience is important with most things I think. It doesn’t have to cost a lot of (or any) money to begin with – you just need to find the right people to work with if you don’t have the technical skills needed. Finding co-founders or people to work with is really important.

Which lessons you learned the hard way developing the app?
100% commitment is the most important thing. I started out Party with a Local as a side project next to my online marketing company and other side projects. It wasn’t until I went 100% ‘all-in’ on Party with a Local that good things started to happen – growth, funding, team, press etc. If you are going to go after something you believe in, you have to go all in. You still might fail in the end, but you’ll definitely fail if you aren’t committed 100%.

The App is basically for traveling, outgoing and curious people? Can we define it as THE Backpackers app?
Party with a Local originally began as a travel app, focusing on connecting travelers with locals, but has since broadened (based on user feedback) to be about connecting anyone anywhere who loves to party – when at home or traveling!

Negative Nancy and Debbie Downer could say that the app is just another Tinder-like app?
We are actively not a dating app and we take “Creep Watch” (against sexist, racist, aggressive or dodgy behaviour) seriously to ensure Party with a Local is a fun & safe place for everyone.

You manly focus on Amsterdam, Lissabon, Sao Paolo en Rio de Janeiro, why?
Amsterdam because we are based here. Lisbon because I spent a month there last Summer for an accelerator program and met a bunch of great users there. Sao Paulo and Rio because we are seeing PwaL grow organically in Brazil – Brazilians like to party and meet foreigners. New York is another city we focus on now. Whilst these are our focus cities, and we are more actively doing activities to grow the communities in these places, we have users in almost every country and city in the world (150+ countries). So you can Party with a Local almost everywhere.

Last year you acquired 200K investment, which is awesome! How did you achieved that?
After being featured #1 on Product Hunt, I started getting some interested from investors in the US. That didn’t go anywhere at the time, but it got me thinking that in order to keep going I probably need to raise some investment. I was put in touch with a Dutch Angel Investor via mutual friends and it all went pretty smoothly from there.

Why does your app flourish on the success of AirBnB?
The ’travel with/like a local’ concept has become big and mainstream now thanks to Airbnb. So far there is no mainstream ‘nightlife with a local’ app and that’s we’re aiming to become. However we are beyond only a travel app.

A question that we always ask: Do you recommend students to follow their entrepreneurial dream or would you advise them to first acquire (corporate) traineeship experience?
It’s up to the individual really I’d say. I think there is value going to work for someone else first before going out on your own. But if you have a great idea and a passion to follow it straight away – go for it.

Who is the most awesome person you’ve met with the App?
There’s a guy called François in Lille, France who went above and beyond in becoming an ambassador for Party with a Local. He has held multiple PWAL parties in Lille, and printed flyers for us to hand around at hostels, bars & cafes. He was doing such an amazing job of it that we spontaneously decided to drive to Lille from Amsterdam one night – to party with him. He exceed our expectations as a host and partier – he’s basically the friendliest and most generous human being I’ve ever met!

Are you awesome and excited? Check more Party with a Local here, here and here!